What are the best behavior-management strategies that teachers can use with their oppositional defiant students? 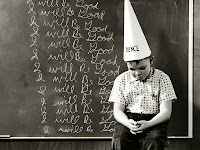 1. ODD Behavior: Complying with the letter of the law but not with the spirit of it—

Teacher’s Strategy: Teach the difference between the letter and the spirit of the law—

Generally, when faced with the “loophole finding” student, teachers will try to become more precise in their language or to add additional rules. Rather than trying to plug the loopholes, have a lesson at the beginning of the year on the difference between the “letter of the law” and the “spirit of the law.” Unless a youngster has a language impairment, she/he knows what the teacher means and is merely testing the limits. In the lesson, you can give examples of statements an educator might make, and then ask the children in class to identify the intent.

Not only does this lesson get the point across, it generally is a lot of fun for teachers and children. Once the educator is certain the group understands the difference between the letter of the law and the spirit of the law, one additional rule can be added to the classroom list: “Follow the spirit of the law.”

Now, when a child tests the limit, the teacher can ask, “Are you following the spirit of the law?” This effectively derails the child who innocently looks at you and smiles, saying, “But I did what you SAID!”

The educator says, “You need to finish your English before you go to recess.” The child responds, “If you let me go to recess, I’ll do my English later. I want to do Math now.” If the educator persists, the child will continue to try to “make a deal” (e.g.,, “I’ll do half my English now, only have half of recess, and then come back in and finish my English”).

Teacher’s Strategy: Ask rather than tell—

Many times this type of interchange can be proactively avoided by asking the children what they should be doing, rather than by telling them what they are supposed to do (e.g., “What needs to be done before you go to recess?”). For the most part, children with defiant behavior really don’t want to be doing something different, they just want to have control and not feel as if they are being told what to do.

Children who are trying to make deals are really saying, “I want to feel like I have control over what I’m doing and when I’m doing it.” If the teacher interprets that sentiment out loud and points out that they do have control, children often will comply (e.g., the teacher could say, “You want to feel like you have control and options about the ‘what’ and ‘when’ of your choices. You do have control. No one can make you do anything you don’t want to. It’s your choice. You don’t do English – then you don’t have recess. It’s totally up to you.”).

3. ODD Behavior: Violating rules right in front of a teacher—

• The educator is walking down the aisle and, as she passes, the child puts her/his feet up on the next chair.
• The educator tells everyone to remember to please raise a hand when answering a question, but the child immediately shouts out an answer.

Planned ignoring is a conscious decision to not attend to the behavior at the time it occurs. It does not mean ignoring the behavior forever, which would be condoning it. Usually, when a child violates a rule immediately after it has been given, it is an attempt to engage the teacher in an argument and seize control of the classroom. Behaviors that are insubordinate, but do not endanger the physical or psychological safety of others, can be temporarily ignored.

When the child sees that the teacher is not going to “give up” control of the classroom by taking the time to engage in an argument, the behavior often stops. If, however, when the behavior is ignored the child escalates it, the teacher needs to interpret the meaning of the behavior. It is important to let your class know about the strategy of planned ignoring at the beginning of the year. You might say, “There are going to be times when someone violates a rule and it looks like I’m not paying attention or I’m letting them get away with it. I want you to know that I am choosing to ignore them for the time being because what’s most important is that I continue to teach and you continue to learn. I want you to know that the misbehavior will be addressed at a later time and the child will receive consequences for her/his behavioral choices. The rules haven’t changed.”

4. ODD Behavior: Intense need to “have the last word”—

Because oppositional behavior is all about control, children who exhibit it have an intense need to have the last word. Remember that they don’t want the argument to end, because when it does, their sense of control ends also. Unfortunately, dealing with a child who has the intense need to win often generates in teachers the same intense need to come out on top.

Teacher’s Strategy: Give them control—

Make the conscious decision to “surrender to win.” Let the child have the last word. Once her/his goal has been achieved, the behavior generally ceases. Once again, “parting-shot” inappropriate comments can be ignored and consequences given later.

Teacher’s Strategy: Agree to answer, but during “their” time—

Generally, if you’ve made it a habit of “asking” rather than telling (e.g., “Where do your feet belong?” instead of “You need to put your feet down”), the child isn’t as likely to get into the “whys.”However, if this occurs, the first thing to do would be to try planned ignoring. If the questions continue, you can agree to discuss the reasons – but only during “their time.” For example, “If you’d like to discuss this, I’d be happy to before you go to recess.” Children who are truly interested in the reason will agree to your request. Those who are just trying to get control of the class will usually respond to your reminder (e.g., “It’s not that important. I need to get to recess.”).

Many children who are defiant constantly point out inconsistent enforcement of the rules by teachers and use this as a rationale for their own behavior. What the children are trying to do is make this an issue of whether or not grown-ups are consistent rather than focusing on the real issue—whether they are choosing to follow or break the rules (“I don’t have to follow the rules if the teachers don’t enforce them”).

Unfortunately, many teachers fall for this. There seems to be an irrational belief that if only every teacher in the environment treats children the same way, they will behave. The total weight of the child behavior is put on the grown-ups, and the responsibility is built on enforcement rather than on compliance.

Teacher’s Strategy: Put the focus back on the child—

When confronted with “other teachers don’t do anything when I____” rationalizations, say, “You feel because you broke the rule and you weren’t called on it that the rule has changed… it hasn’t.” …or… “You would like it to be Mrs. Jones’ fault that you are breaking the rule.”

When children say, “You can’t make me,” they are asserting their control and challenging yours. They are silently hoping that the teacher will rise to the challenge and try to control them. Like it or not, they are right. Teachers can’t make anyone do anything against her/his will.

These children are also upping the ante—challenging teachers to come up with some consequence that will mean something to them. The “test” is to show teachers their own powerlessness, and these children will often laugh in the face of any consequences teachers might use, even if at a later time they might wish they hadn’t.

You can consciously choose to avoid getting into a power struggle. You might generally agree with the child by saying something like, “You are absolutely right. I can’t make you. The only person who can control you is you. I hope you make a good decision for yourself.”

Children who ask, “What are you going to do about it?” are not so much interested in your answer as they are in trying to prove how incapable you are of controlling their behavior. A good response to this question might be, “You are trying to decide if it’s worth it for you. That lets me know that you are in control and are choosing whether or not to behave. That means you’re also choosing to accept whatever the consequences are.”

Note: Rarely, if ever, tell the child what the consequences will be, because (a) it generally doesn’t make a difference to them, and (b) vague consequences can serve to keep them emotionally off balance. Children who are oppositional don’t like uncertainty, and they are often more likely to make a decision to control their behavior if they don’t know what will happen. You could say, “Because you are telling me you’re in control, and it sounds like you’re just trying to see what will happen, is it worth it for you to act-up just to see what the outcome will be?”